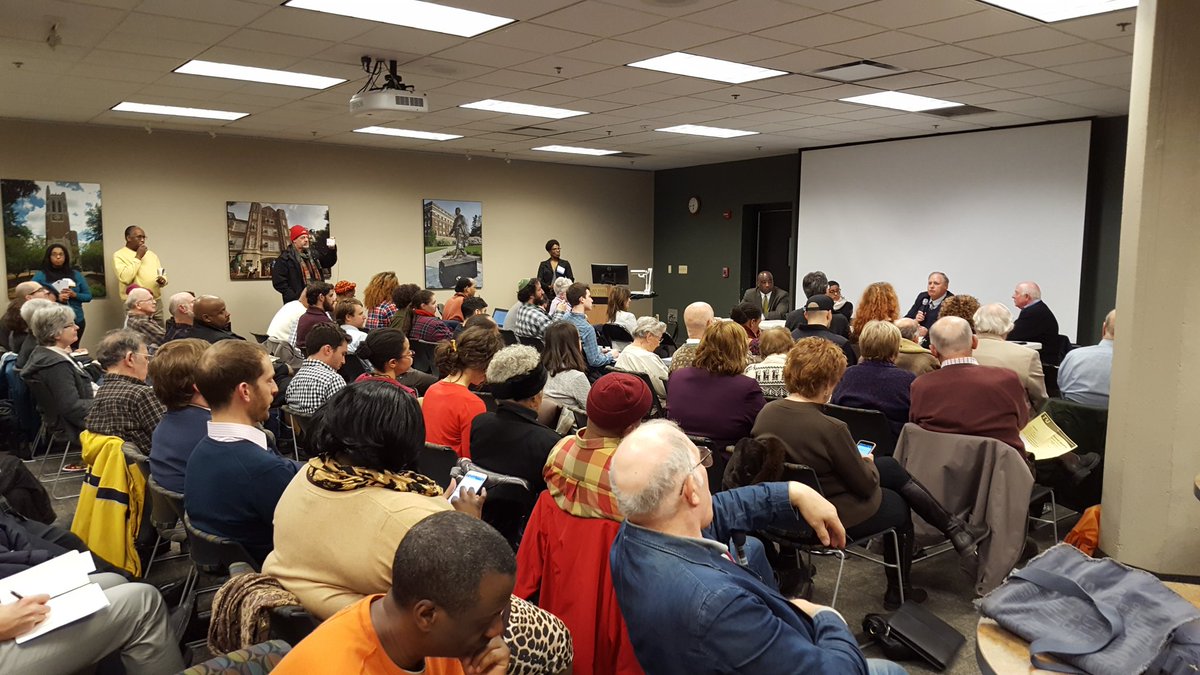 Highlights of the presentations are summarized below. The Detroit News also did a nice summary article. Full video of the panel discussion is available on Facebook.

TRU’s Executive Director, Megan Owens, opened the meeting by stating that 2016 was a great year for transit in the 4-county region. It was a great year, because of the commitment and hard work of many people. Almost every person in attendance indicated they were involved last year in improving transit. Although the regional transit millage did not pass, 894,346 people voted yes, more than ever before. Review TRU’s Statement on the Regional Transit Millage Loss and TRU’s 2016 Detroit Transit Year-in-Review for more information. (video)

Admittedly, our transit problems still exist. People continue to struggle every day to get where they need to go despite the substantial work by the current transit providers. The providers are limited by geography and budget. The Southeast Michigan region spends a 1/3 of what comparable metro regions spend on public transportation per capita. There is no firm plan when regional transit funding will be placed back on the ballot, although there is hope for a 2018 ballot proposal.

Owens explained that TRU conducted a survey in December 2016 which reflected that the 150 people who responded remain committed to fighting for more and better public transit as TRU has done over the past 17 years. TRU provided a summary of the survey results, including opinions on the challenges public transit faced last year and the opportunities they saw going forward.

Michael Ford, the RTA CEO, started by thanking everyone for their support of the millage and thanking the transit providers. (video) Although Ford expressed disappointment in the results, he is committed to move forward. He explained that last year, the RTA accomplished three significant things:

Ford cited the Reflex service as an example of collaboration with transit providers.

Like the RTA and SMART, Dirks identified Reflex as a collaborative effort.

Sommer Woods, Director of External Relations, discussed M-1 RAIL’s 2016 accomplishments and 2017 activities as they prepare for the Spring 2017 launch of the QLine streetcar along Woodward from Congress in downtown Detroit to Grand Boulevard in Midtown.

This year, the new kid on the block in terms of transit providers will:

In terms of collaboration, the M-1 RAIL CEO, Paul Childs, continues to have conversations with the other transit providers to insure multi-modal connectivity – coordinating the different ways of getting around including walking.

The panelists responded to community members’ questions ranging from the DDOT terminal fire; training of bus drivers; expanding Reflex to other roadways; QLine safety education; rumors of a possible merger of DDOT and SMART; and what was learned from the millage loss. Videos of the Q&A session are here.

At the conclusion of the meeting, TRU’s Board President, Kelly Logan, facilitated the board election process.  Members (who contributed financially to TRU over the past 12 months) elected three new Board members: Sam Butler, Tanise Hill, and Julie Tschirhart.

TRU thanked our members, volunteers and partners before we departed – committed to improving public transit in greater Detroit.